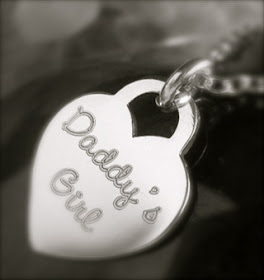 So, I’m at this backyard BBQ when this guy walks up…
Listing, he points his wine glass at me, “Fireman, right?”
“Uh-huh.”
It always goes the same way…
Idyllic, bullshit conversation ensues…
“Checkers and coffee all day, right?” He chuckles and claps me way too hard on the shoulder in a way that is way too chummy for a guy who’s not my friend.
Who the fuck is this guy?
I smile back, “Right…”
“You guys make a lot of money,” he persists.
I take a drink of my beer as my eyes dart around looking for my wife.
Get me out of here.
“I hear you guys are never at work.”
“Well, that’s not actually true…”
I can feel it, here it comes.
“So…”
The obligatory, ugly question.
“What’s the worst thing you’ve ever seen?”
Fuck.
“You don’t want to hear it.”
“C’mon man, tell me…” A misting of spit hits my face. He pokes me in the chest.
Others surround to witness the novelty, I can hear them now…
“He’s a fireman, how neat…”
I’m like a side-show carnie…
Tell us a story…
“No, you don’t want that in your head.”
“I can take it, c’mon give me a good one.”
If he had only raised his chin as he said it.
I snarl inside.

The fuck you can…

Ok motherfucker - you want to take that ride? Take a deep hit of that chardonnay you cradle in your callous free, SPF 70 protected hands- you’re going to need it.
You asked for it, you pussy with your limp-dick, sweaty hand shake, living your insipid, zero-risk life, here it comes…
Climb inside my fucked up skull.
“Ok…
What do you think about when you drive to work?
I think about scars in the pavement, deep and angry.
Three cars…
Battery acid, gasoline, radiator fluid, crunching glass beneath my feet…
A dead girl, a screaming boy, a headless man, a dog…
120 days a year, cup of coffee in hand on my way to work, I pass the spot…
Trips with my family, there she is…
It's always there, if I try not to think about it - I’m thinking about it.
Right?
If I choose a different road, so I won’t see the scars in the pavement, it means I took a different road so I wouldn’t think about it - still thinking about it by trying not to think about it - a fucking endless feedback loop.
So here it is.
Fuck you for making polite conversation.
For making me think about it again.
I see a woman asleep drifting across the median into oncoming traffic,
A large truck with a lumber rack, you know the kind I mean?” 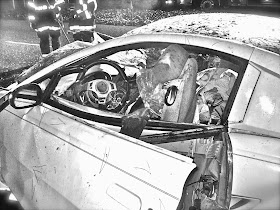 A horrific impact.
Front ends buried in the freeway, pavement gouged.
A woman sits beside the road, as if dropped from the sky, knees tucked to chest, head down, her face vacant.
She doesn’t have a mark on her.
Where’d she come from?
The boy is crushed. The girl is dead.
She was pretty as I recall… underneath blood matted shoulder length auburn hair, ribbons of ruby blood lay against her ashen skin, life drained, her heart crushed by the collision.
I watch her chest for the heaving of breath.
Nothing.
I brush a wisp of hair aside and touch her neck, still warm, slick with blood, feeling for the liquid slamming of her heart.
Nothing.
She wore a sleeveless blouse, on her shoulders she has tiny freckles…
Slivers of glass glisten like pixie dust over her body…
She spills from her seat onto her boyfriend, the driver.
He screams a scream from a place I’ve heard too many times, that place of anguish I never want to go again.
‘HOWS MY GIRLFRIEND? SHE WON’T ANSWER ME…’
Her head lies on his shoulder, neck violently snapped on impact.
His torso pinned, he can’t turn to see her or free an arm to touch her…
I lie. I say we’re doing everything we can.
We can’t do anything for her, she’s dead.
I sort the dead and living as though reading a grocery list.
No breathing, no pulse...
Next…
It’s nothing personal, it’s the job.
At times like these when you’re dead, you’re dead. If you’re close, you’re probably dead too.
Close counts in horseshoes, hand grenades, and triage.
That’s not it…”

I seethe.
“Yup.
Truck spins off into another lane…
A normal guy in a car…
Going about his antiseptic life when two vehicles explode in front of him,
The big work truck, the one with the lumber rack- careens backwards into his lane…
The bumper of the truck with a 50 lb. vice attached,shatters the wind shield, severing his head…
When somebody’s head is gone that’s an easy one to figure out, done.
Next…
Vice and head in the back seat.”
“No…” the prick says.
“Want some more?” I ask like a combat-raged door gunner, straight out of the throes of battle, words are my ordinance.
He looks for a way out, “Oh my God…”
I lean in to him, temples throbbing.
“Wait, there’s more… You wanted a good one; right?
The car is really fucked up,
Now we have to get the boy out...
It takes about a half an hour or so.
He’s SO twisted up inside the car, every time we try to push, pull, or cut part of the car he screams from that place.
Long, drawn out, torturous screams until he loses his breath…
The veins in his neck bulge.
‘STOP! OH MY GOD, STOP!
HOW’S MY GIRLFRIEND?’
I try to soothe him, ‘Hang in there buddy. This is going to hurt.  We’re doing the best we can.’
Pathetic right? That’s the best shit I can come up with under the circumstances.
I had a lot going on.
I can’t see his face anymore, only hers.
Hazel eyes open to stare at nothing.
A heart shaped pendant around her neck...
‘Daddy’s Girl’
Each time we rock the car, her head, held on her freckled shoulders only by the skin of her neck, no life to hold the muscles firm, bones turned to gravel, convulses side to side and front to back in a manner that I can’t describe.
Or maybe I just did...I don’t know…
Stop shaking the fucking car!
We hold her head still so we feel better…
‘SHE WON’T ANSWER ME…’
We pop the door off with the Jaws -
Dashboard finally pushed off the boy, we lift him out.
Bones broken, his arms and legs hanging and bending like he has extra joints in the center of all his long bones.
Kind of like the limp tentacles of an octopus. Does that make sense?”

The prick looks through me.
I gulp down some beer...
I boil…

Poke me in the chest again motherfucker…
“My job isn’t so fucking cute anymore is it dipshit?
And it’s still not over.
Sharp white fragments of bone stick through his skin from these newly formed joints in the middle of his arms and legs.
The jagged ends grind together as we carry him…
He screams…
His limbs shattered in too many places to count.
A gurney carries him away.
Just when I think it’s over… this God damned dog appears.
Where the Hell did he come from?
He limps along on three good legs. One of his fore legs angled in a way that doesn’t make sense.
Enough already!
FUCK!
He whimpers. Dazed, he hobbles past me.
His snout is bent at weird angle too, webs of blood and drool hanging from it.
‘Aw, Jesus Christ! Let me shoot him…’ A police officer says to no one in particular.
We cover the daddy’s girl with a yellow blanket.
I look down and think, ‘Holy shit, look at how deep the pavement is scarred.’
Anything else you want to know before you move on to the next conversation?”

“Every time I drive past, there she is.”

The terrible (and real) accident occurred a number of years ago (2003) on Highway 280 in Northern California. I was inspired (strange choice of words) to write the piece when my wife asked me over coffee on a Sunday morning (2011) what it looks like when a train hits someone.

She had been reading an article in the paper in which a couple visiting our area were hit by a commuter train and the wife was killed. I have been on too many pedestrian versus train incidents in my career. My answer, “Not pretty. You don’t want to know.”

Most of the time I’m polite and I decline to tell stories. The ghosts that rattle around in my head need to stay there, free to haunt me and no one else. My reality is not the same as theirs. Not even close. I am glad it’s not.

My mind says to me, “Remember when that guy doused himself in gasoline and lit himself on fire? Remember what it smelled like in the medic van as you drove him as fast as you could to the trauma center?”

That was Mockingbird Lane in Sunnyvale, 1997. I was a 24 year-old kid EMT on a paramedic unit.

Charles Bukowski wrote a beautiful and somber poem titled “The Layover”. I think it sums up a lot of what I have seen, and what I experienced in my career, though years ago by measure, it is only one sentence back in my mind.

That moment - to this. . .
may be years in the way they measure,
but it's only one sentence back in my mind
there are so many days
when living stops and pulls up and sits
and waits like a train on the rails…
I look up at the window and think,
I no longer know where you are,
and I walk on and wonder where
the living goes
when it stops

I look at places around town in terms of where my first fire occurred, someone was stabbed or shot there, we delivered a baby on that corner, and scars in the pavement…
Someday the freeway will be resurfaced and then maybe she’ll go away, or maybe she won’t.

Every time I drive to work along the freeway my eyes track to the exact spot where the pavement is gouged and I go back.

Battery acid, radiator fluid, twisted metal, crunching glass beneath my feet, the sweet, coppery smell of blood…and there she is.

***PTSD is a subject we don't like to talk about.  Suicide among Fire/Police/EMS is a much bigger problem than anyone cares to mention.  It is truly the industry's dirty little secret.  They are both very real issues and they are right in our face.  If you, or someone you know is suffering there is help: Contact the National Suicide Prevention Lifeline
1(800) 273-TALK (8255)